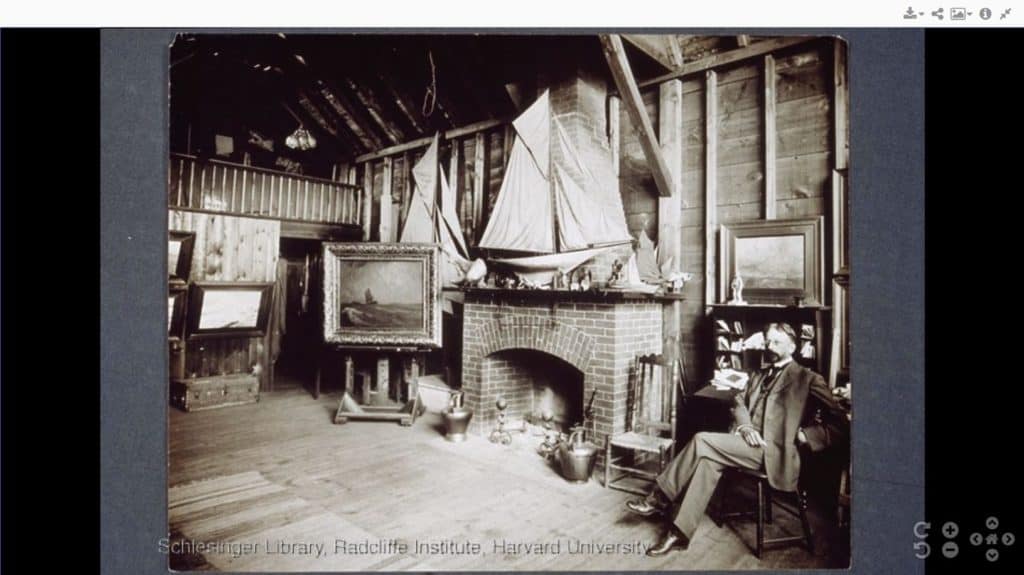 Hold the presses. Although we promised to shift our narrative from Charles Woodbury: Open Studio to The View from Narrow Cove, every transition between galleries deserves a segue. We have the perfect one, a bridge, and two views of it by two artists responsible for founding the Ogunquit art colony: Charles Woodbury, founder of the Ogunquit School of Drawing and Painting; and Hamilton Easter Field, founder of the Summer School of Graphic Arts. As if the fact that “Open Studio” is installed as an exhibition-within-an-exhibition in the middle of the Barn Gallery were not enough, the two founding members of the art colony were separated, literally, by the bridge at Perkins Cove. On one side, Woodbury’s studio/classroom overlooked the channel. One the other side, Field built his studio in the famed “Island House” on Adams Island. The Island House as it appeared during Field’s renovations was built on an outcropping of ledge rock, later joined to the mainland by a causeway. Field’s school and his students were quartered in the building with symmetrical sides. The building currently houses several novelty shops.

Every story benefits by irony as much as it does by transition, plot, character, setting, etc and there’s more than enough literary elements at play for a good story associated with Narrow Cove and Perkins Cove. While the bridge at Perkins Cove linked the two artists and their schools by a mere footpath across the channel, it also separated the founders (and their students) by differing ideologies and instruction. Woodbury and Field debated methodology on more than one occasion. More about their story and their students’ stories in the days ahead. 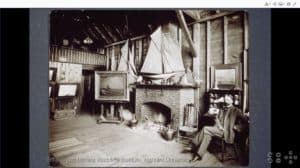 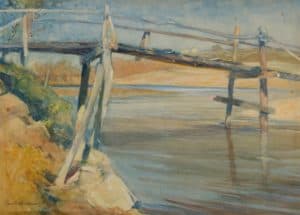 Teacher, writer, marine painter, and illustrator, Charles Herbert Woodbury studied engineering at MIT while pursuing an interest in painting and began teaching painting shortly after graduation. In 1890, after marrying his pupil, Marsha Oakes, the couple travelled throughout Europe.

In 1896, Woodbury purchased five acres of land from local farmer Jedediah Moses Perkins, which included the parcel where the Ogunquit Museum of American Art is sited. Woodbury constructed a studio — extant today — overlooking Perkins Cove. He began offering six-week summer classes in 1898. Woodbury’s successful school drew students from New England and New York, transforming Ogunquit into a major American art colony. Woodbury suspended classes during WWI and resumed teaching in 1924 until his death. Woodbury influenced thousands of American artists of the era — You don’t draw what you see of the wave, you draw what is does— and authored three books on the subject of teaching art. 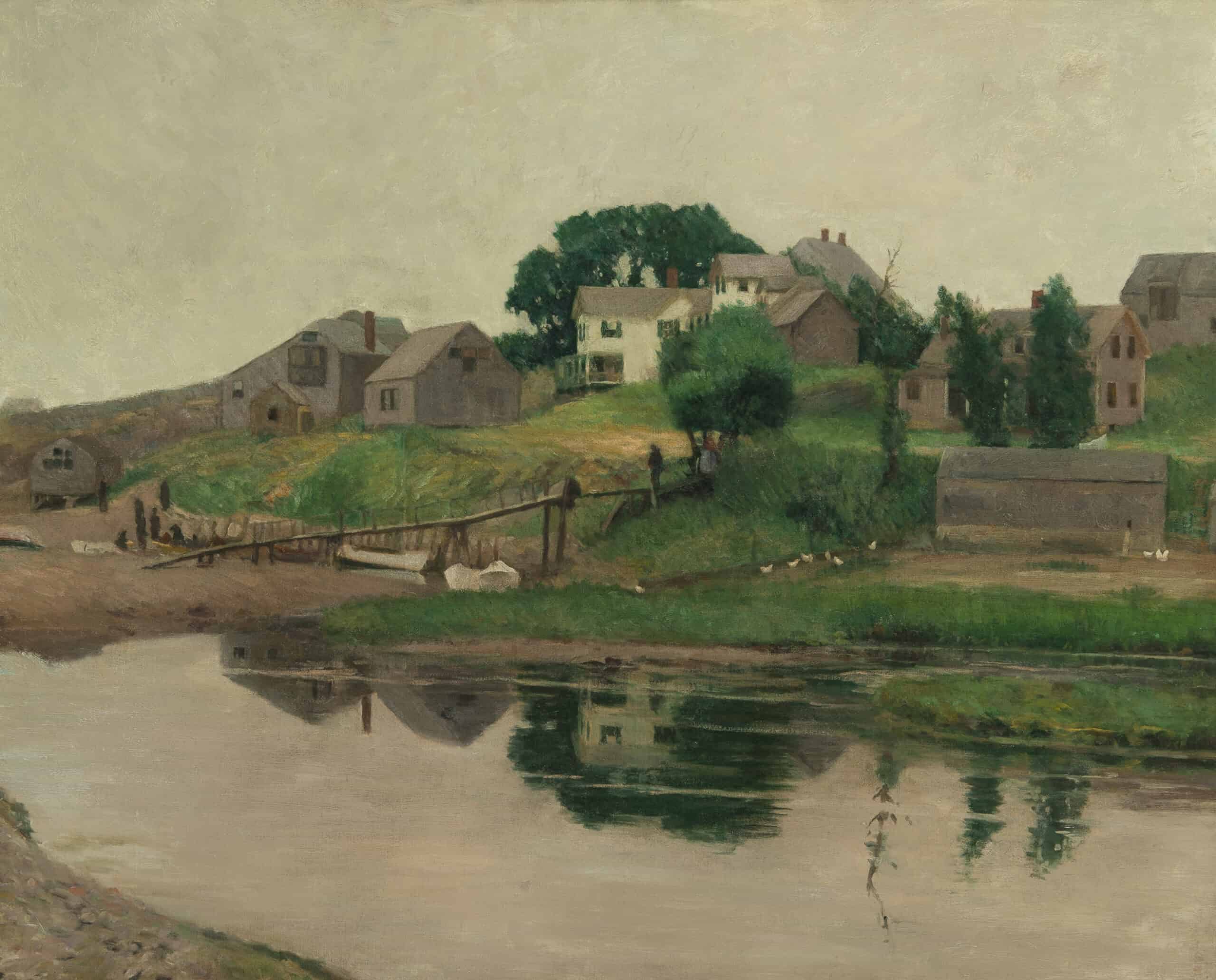 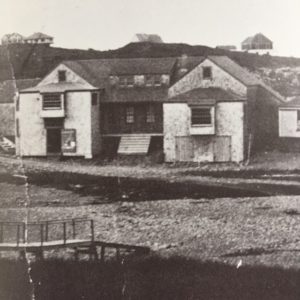 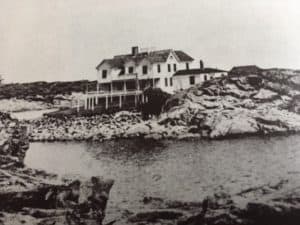 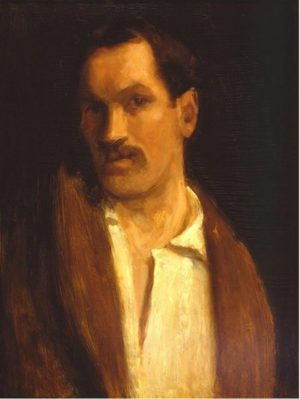 Born into a wealthy Quaker family, Field studied at Harvard and Columbia University and was proficient in five languages. He traveled extensively in Europe as a young adult, studying literature, music, and painting.
Field first came to Ogunquit In the summer of 1902 with young French protégé Robert Laurent in search of a summer home. He began buying property in Perkins Cove and when Laurent’s formal education was complete, the two built a studio and opened the Summer School of Graphic Arts where Laurent taught sculpture and wood carving while Field taught painting and life drawing. Regarded for his influence as a painter, teacher, collector, art critic, and writer, Field served as a major proponent for American Modernism, advocating for non-European traditions and the movement away academic art.
Field’s teaching methods and students were experimental in comparison to Charles Woodbury’s academic following. Field’s contemporaries in Ogunquit included Robert Henri, Walt Kuhn, and George Bellows. According to George Karfiol, son of artist Bernard Karfiol, “Woodbury’s school featured the outdoors: landscape and seashore. Field’s school worked more indoors and featured sculpture and work (drawn) from the nude model. The Woodbury school was Boston-oriented; the Field school was New York-oriented.”

The View From Narrow Cove: Bicentennial Oqunquit is made possible through the support of Sparhawk Oceanfront Resort and The Maine Bicentennial Commission.

Charles Woodbury: Open Studio is supported by Elizabeth Cutler and Joanna Manikas and the Woodbury Family.