OMAA features an extensive collection of outdoor sculpture in its 3-acre seaside garden.  During an easy stroll, you’ll discover sunny flower borders and cool shade gardens, a reflection pool, and secluded benches for quiet contemplation.  Visit often, there is always something new to see as the gardens bloom and change with the seasons. 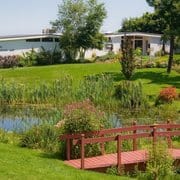 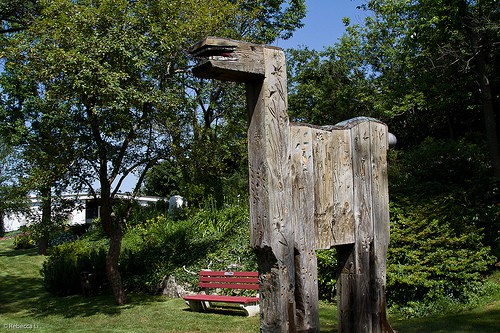 Bernard Langlais (1921-1977)
Horse in Field, 1968
wood on cement base
Museum Purchase
1969.1
Originally from Old Town, Maine, Bernard Langlais grew up inspired by his rural surroundings and the work of his carpenter father. His childhood exposure to lumber harvesting, lumber mills, and woodworking factories led him to a lifelong attraction to wood. After leaving school to serve in World War II, Langlais studied and worked in the New York region before eventually settling back into his home state in 1966. Today, Langlais is well known for his large scale, wooden animals. Surrounding his home studio in Cushing, Maine is a personal menagerie of works left in the artist’s estate. 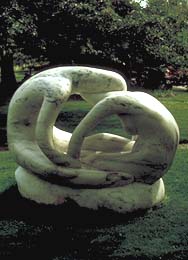 Antoinette Schultze (b.1944)
Life Entwined, 1988
Vermont marble
Gift of the artist
2001.2
After moving to a dairy farm in Eliot, Maine, Antoinette Schultze began sculpting to fill the empty farmland around her new home. As seen in both her painting and sculpture, Schultze is continually inspired by the human figure. She describes her work as expressions of human emotion and works primarily in wood, bronze, or marble. 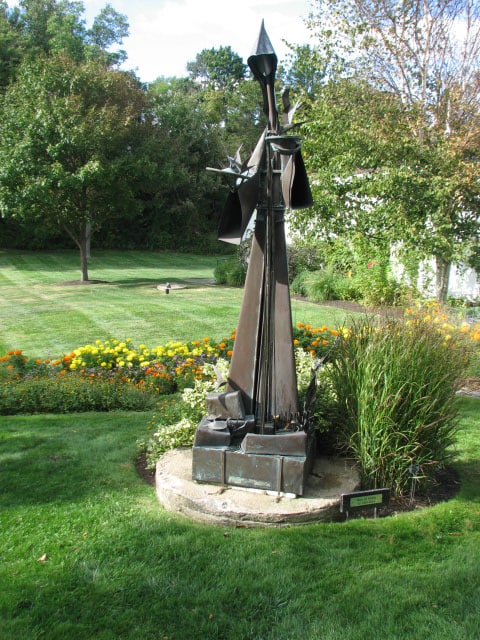 John Dirks (1917-2010)
Man of Assisi, 1980
mixed metals
Museum Purchase
1980.13
In 1988, American cartoonist John Dirks was personally selected by Henry Strater to take the position as Director of the Ogunquit Museum of American Art. After working successfully for years as a cartoonist, John Dirks was introduced to metal work by a friend. As a child, he spent most of his summers on the coast of Maine and this left him with a lifelong fascination with rocks, water, and organic forms. The Maine coast continued to inspire Dirks during his later life and into his sculpting career. He worked with metal and pump systems to create abstract, functional fountains. Today his work can be found across the country as well as overseas.

Robert Laurent (1890-1970)
Dolphin, 1958
cast bronze
Gift of John Laurent
2003.1
Robert Laurent pioneered the direct carving method. By directly carving into his materials, Laurent’s forms reveal a sense of action and thoughtfulness, eluding to his candid technique. One can sense the surge of the muscle and movement in Dolphin, which references the strong influence Ogunquit’s marine life had on Laurent upon his arrival to the United States from France. 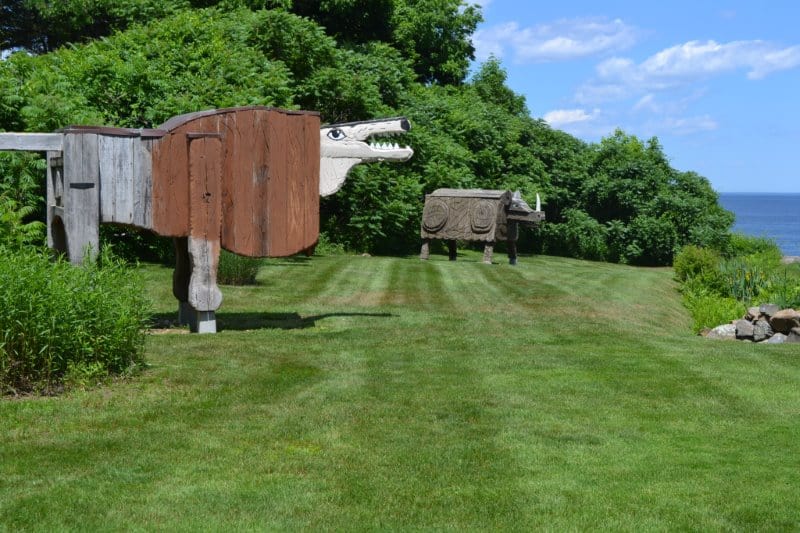 Bernard Langlais (1921-1977)
Lion, ca. 1970
wood and paint
Gift of the State of Maine
1988.2
The lion is one of Langlais’ most common subjects. In drawings, prints, and sculptures depicting the animal, the artist’s compositions contain a sense of motion in bold lines. Langlais often emulates a sense of pride and strength lions are known for in the subject’s pose and the materials used. This particular lion’s pride is boldly evident with his head thrown confidently up to the sky. 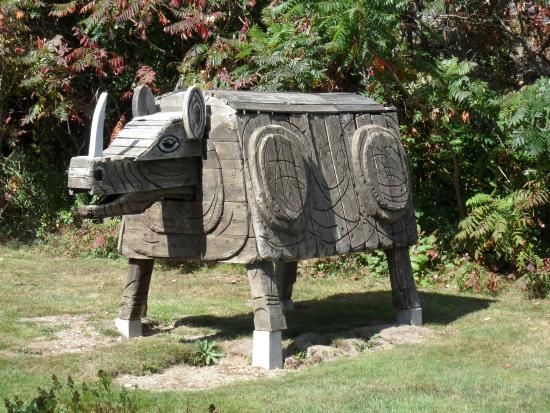 Bernard Langlais (1921-1977)
Rhino, ca. 1970s
carved wood and paint
Gift of University of Southern Maine
2013.2
For decades this work was located at the University of Southern Maine’s Gorham campus, before migrating to its permanent home here in Ogunquit. While on the school campus, Rhino mysteriously lost its original horn, and according to college rumor it was students of a rivalry school who removed it. Quirky and unique, this piece sports a hollow interior that was once a secret hideaway for the audacious college student. 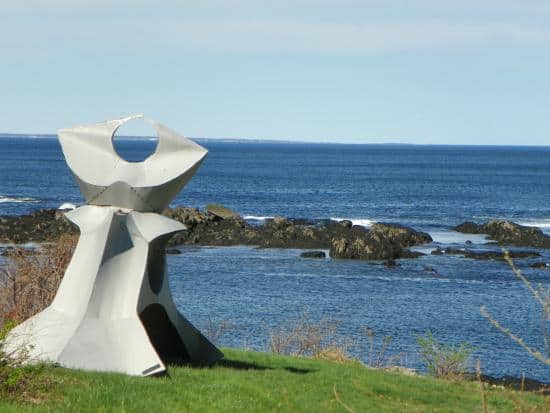 Patricia Fitzhugh (Wright)(b.1939)
Luna, 1968
welded aluminum
Gift of the Artist
1989.1
Patricia Fitzhugh (Wright) prominently sculpted in metals, but also specialized in commercial stained glass. This work is unique to the OMAA sculpture garden, as its location and installation was specially chosen and accomplished by the founder of the museum, Henry Strater. 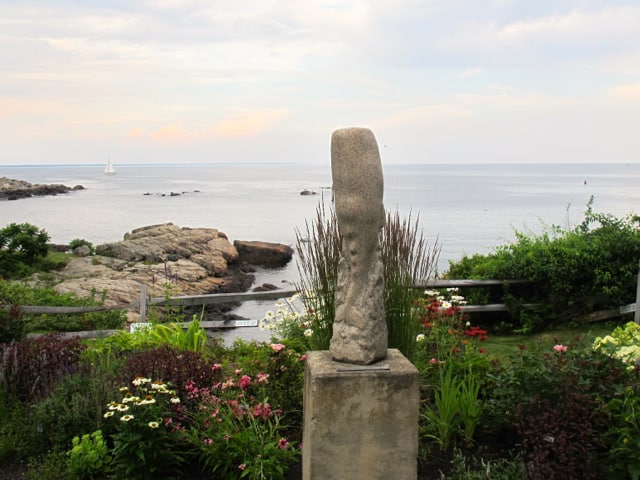 Cabot Lyford (b.1925)
Breaching Whale, 1990
carved Maine granite
Museum Purchase, with funds from the Peter Spear Memorial Fund
1991.15
Cabot Lyford spent his life successfully involved in creative work. First Lyford worked in television and movie production, and later he became a successful sculptor and chairman of the art department and director of the Lamont Gallery. His work is recognizable for its simplification of details and tendency to round all shapes’ edges.

Frances Lamont (1899-1975)
Garden Toad, Date unknown
carved Westfield green marble
Museum Purchase
1968.16
Frances Lamont began studying art in the galleries of Italy. After moving to New York, she continued her training at the Art Students League and the School of American Sculpture. Primarily working in metal and stone, Lamont is known for sculpting themes of nature and animals in a perspective much like that of a child. Whether the subject has been shrunken down from its true size to that which a small child could hold or has been represented in a much rounder, caricature likeness of itself, her creations hold onto a sense of innocence and wonder. 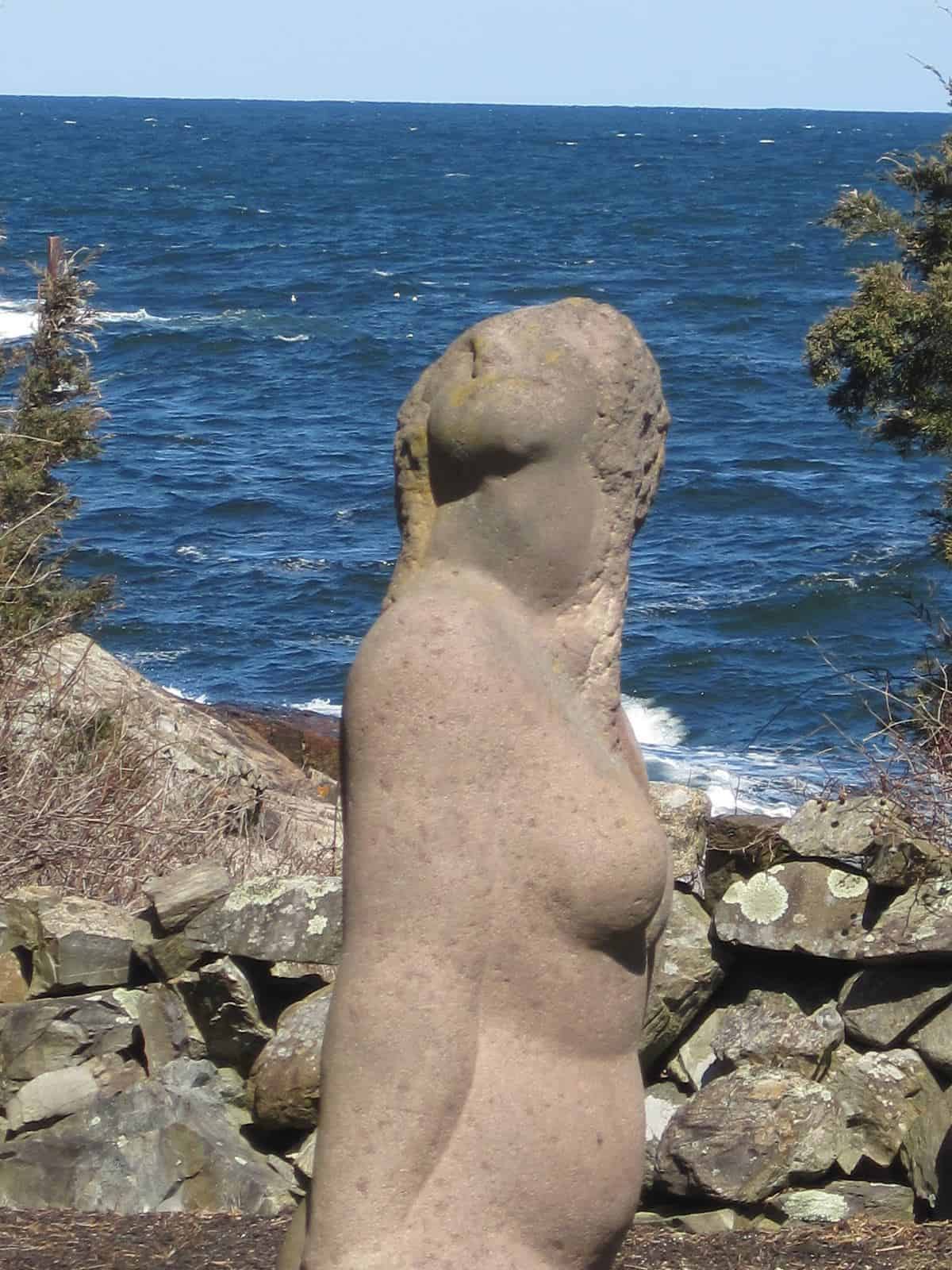 John B Flannagan (1895-1942)
Morning, 1938
carved stone
Gift of Chauncey Stillman
1961.4
John B. Flannagan worked in the direct carving technique pioneered by fellow Modernist sculptor, Robert Laurent, who is also featured in the OMAA sculpture garden. Flannagan began mastering stone carving works, like Morning, 1938, while living in Ireland during the early 1930s. Often choosing subject matter that contained human figures, mother and child is one of the artist’s most common themes. This attraction towards depicting a connection between mother and child has been attributed to his separation from his parents during childhood.

William Zorach (1886-1966)
Victory, 1950
cast bronze
Museum Purchase
1955.3
William Zorach was originally trained as a painter before discovering his natural talent in sculpture. After his marriage to artist Marguerite Thompson, Zorach bought a summer home in Robinhood, Maine where he produced numerous paintings and sculptures inspired by the rural outdoors. When in Maine, he carved directly into stone, taking inspiration from the material and allowing the sculpture to emerge from within the stone when carving. 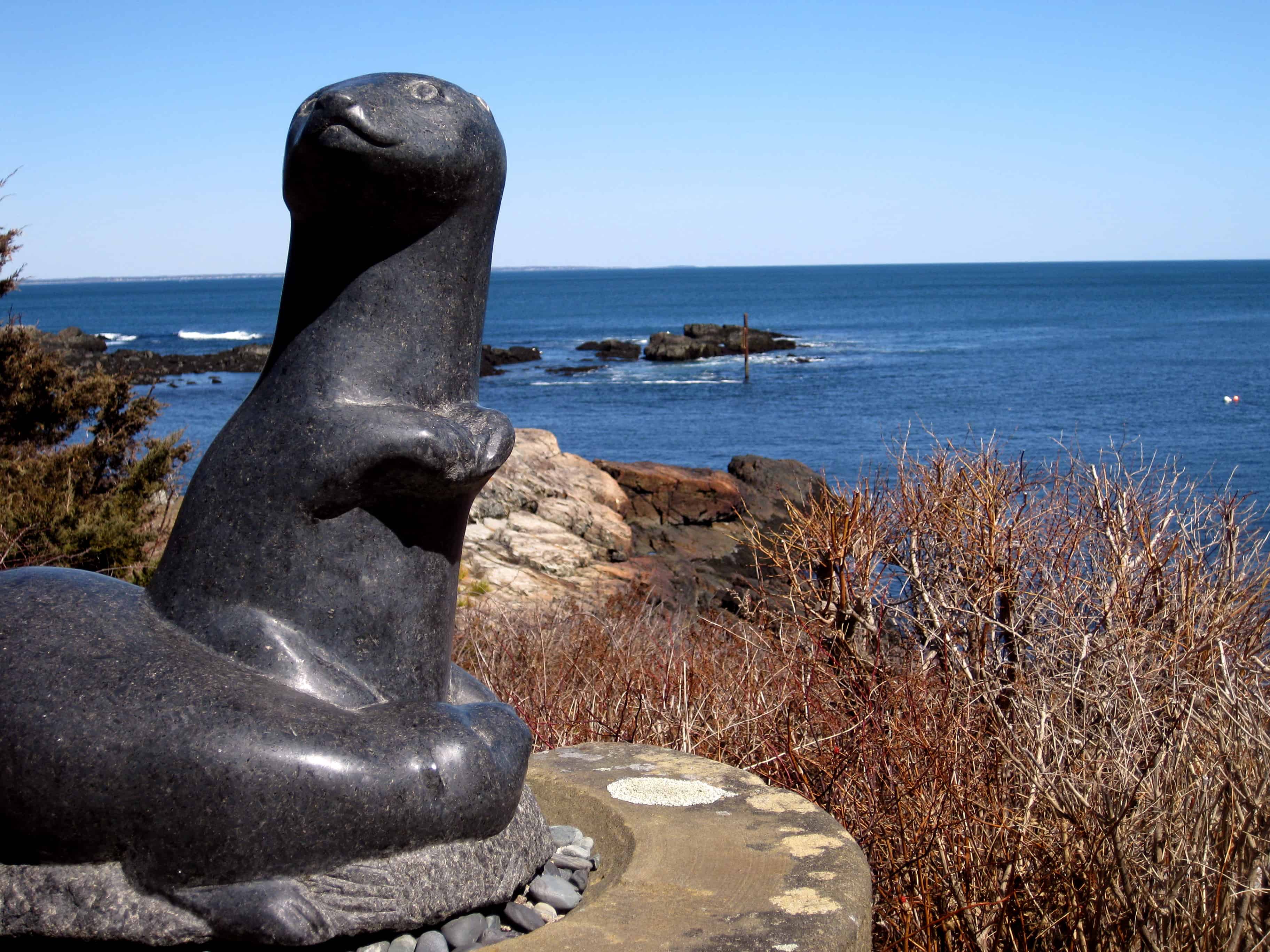 Cabot Lyford (b.1925)
Otters, 1993
black granite
1997.11
While these otters may contain more facial details than Cabot Lyford’s Breaching Whale, 1990 to the right of this sculpture, they too have had their forms simplified and rounded in the manner for which Lyford is known.

Robert Laurent (1890-1970)
Mother and Daughter, 1942
Indiana limestone
On alone from the Laurent Family
One of America’s most honored sculptors, Laurent was a pioneer in the direct carving method. Laurent was born in France yet chose to live and work in the United States after he was brought to Ogunquit under the guidance of his mentor, Hamilton Easter Field. Laurent’s figurative work can be identified by characteristics of a spontaneous approach to composition, the use of simplified closed forms, a strong sense of mass, and a sensitive response to the nature of the material. 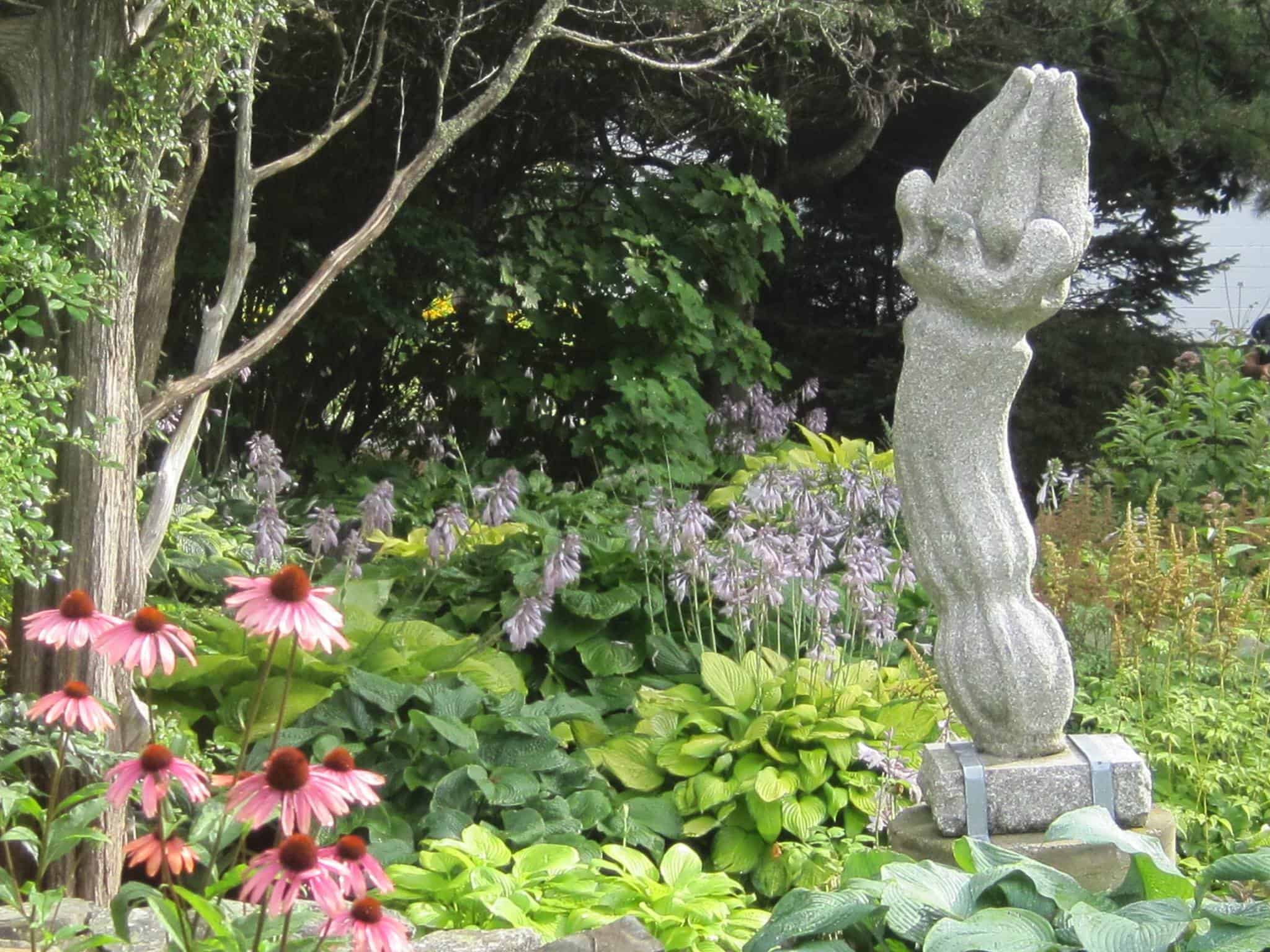 William Muir (1902-1964)
Pavanne,1960
sandblasted Deer Island granite
Gift of estate of Emily Muir
2003.19
William Muir was an abstract wood carver as well as a modernist painter. While the artist was well versed in both stone and wood sculpting techniques, Muir’s interest in finding and embracing abstract forms within the unique qualities of each piece of wood resulted in an obvious style contrast between his stone and wood creations. 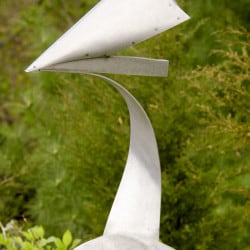 David von Schlegell (1920-1992)
Spring Fragment, 1964
aluminum and granite
Museum Purchase
1964.4
Prior to studying art, David von Schlegell worked as an engineer as well as a pilot in the U.S. Air Force. Influence from these past careers can be seen in his abstract sculptural work made of iron, aluminum, and other industrial materials focusing on the creation of kinesthetic sensations. Juxtapositions of simple and complex, and bold and delicate are found in his creations. 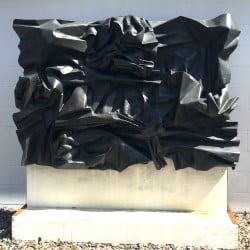 Abbott Pattison (1916-1999)
Large View of Tuyue (China), 1974
cast bronze
Gift of the Maine State Museum
2013.6
Abbott Pattison was born and raised in Chicago, where he attended a progressive and creative elementary and high school. He later attended the Yale School of Fine Arts and moved on to studying and working abroad upon receiving a traveling fellowship in 1939. Pattison was exposed to modern and avant-garde sculptural forms in both China and Japan, an influence which is apparent in this work. 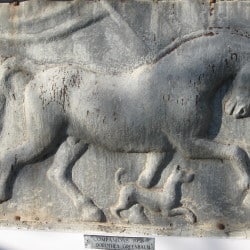 Dorothea Greenbaum (1893-1986)
Companions, 1958
hammered lead relief
Museum Purchase
1958.1
In this relief sculpture, artist Dorothea Greenbaum has captured a moment of play between horse and dog. The artist’s work often sought to embrace the spontaneity of life: "My approach is not at all intellectual. I am in love with nature---the stones, leaves, shells, and all the living things about us. They supply me with the impetus to 'make something'." Artist quoted in Dorothea Greenbaum: A Retrospective, Smithsonian American Art Museum and The Renwick Gallery, Exhibition Catalogue, 1972. 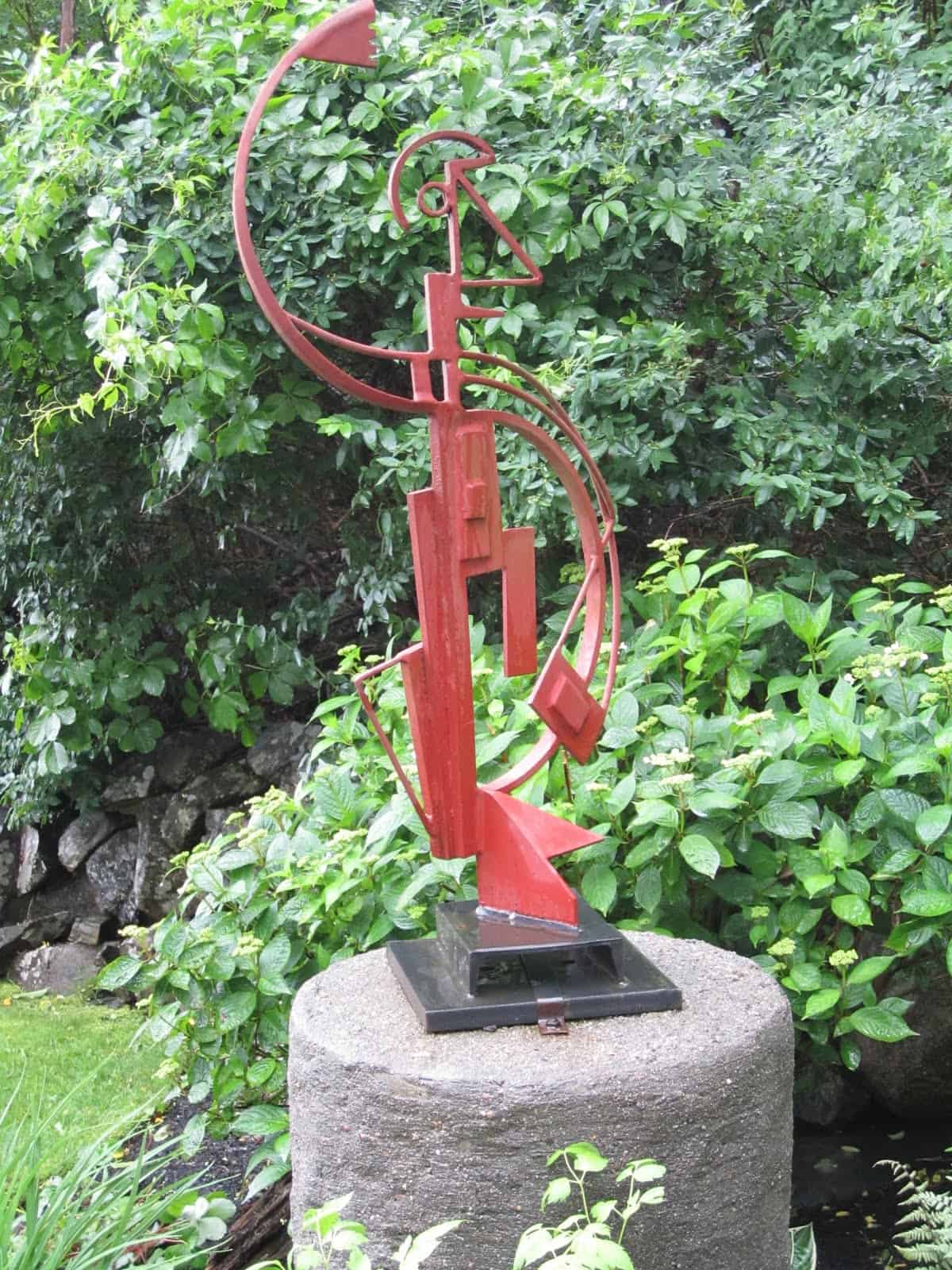 Karl Ingard (1960-1997)
Dancer, 1993
welded steel and paint
Gift of Uno and Doris Ingard
1998.11.2
Karl Ingard created his abstract steel sculptures in a metal shop at his home in Kittery Point, Maine. A sense of action and inspiration from found objects combine uniquely in each Ingard sculpture. He was a member of the New England Sculptors Association and displayed his sculptures in galleries throughout New England. 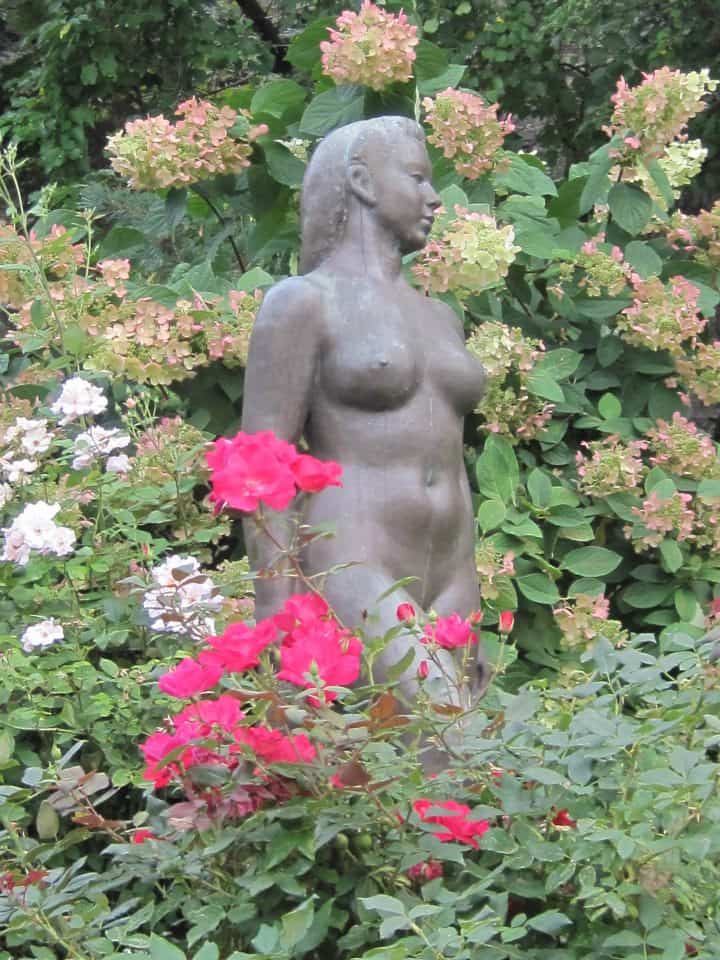 Dorothea Greenbaum (1893-1986)
Girl with Towel, 1967
cast bronze
Gift of General and Mrs. Edward Greenbaum
1968.1
Dorothea Greenbaum began her artistic studies at the Art Students League in New York. After beginning studies in painting, she quickly transitioned and fully pursued sculptural work. During her lifetime Greenbaum worked to improve the rights of artists and was a member of the Sculptors Guild as well as founder of Artists of Equality. Greenbaum sculpted in bronze and marble representational heads and full figures ranging from miniatures to life size.