Home / Blog / Objects of Our Affection: The Rising Moon – The Golden Fleece

Objects of Our Affection: The Rising Moon – The Golden Fleece 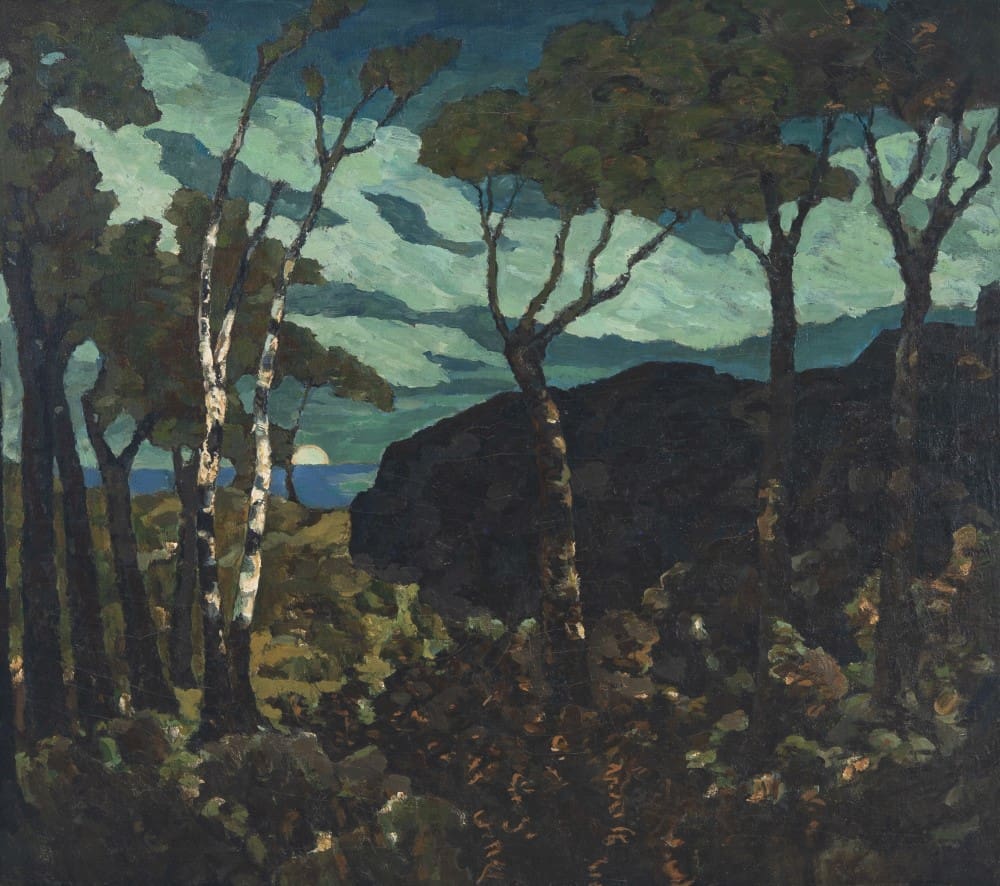 In this new series, OMAA staff, volunteers and friends discuss their favorite art and sculpture from our collections.

I have many favorites in our collection, but I come back to this piece often. It’s mysterious and seems to ask as many questions as provide answers.

When the painting was donated to the museum, it was in rough shape but a true beauty. The Maine Project for Fine Art Conservation in Portland conserved it for us. When it came back, I was knocked out by how pristine it was, with the blues and gold coming through. It was perfect.

What does the title of the work tell us about the painting and the artist?

The title is a reference to a Greek myth in which the golden fleece is the golden-wool, winged ram, Chrysomallos, held in Colchis. The story goes that Jason and his crew of Argonauts set out on a quest to capture the fleece by order of King Pelias to place Jason on the throne. The fleece is a symbol of authority and kingship. What Coolidge meant by his title — the rising moon and the golden fleece — has always intrigued me because the connection to Greek mythology is not apparent. For one thing, in Coolidge’s painting, the moon is white and silvery but if you examine the foliage and treetops in the foreground, you see the paint has a golden hue. The foliage is wooly and curly as if the landscape is a golden fleece but there’s more to it than that. My guess is that when he painted “The Rising Moon – The Golden Fleece,” Coolidge was seeking more respect and regard for his art. Although respected and successful, he was identified more with Ogunquit’s summer society life, the art colony, and local residents. But Coolidge actually exhibited his work in many prestigious New York City art galleries and I feel that this painting was his way of saying he had, in fact, captured the golden fleece; he was more serious in his art than the locals may have realized.

Tell us about Mountfort Coolidge.

Coolidge was born in Brooklyn, New York, and came to Ogunquit in his early teens, when the town was already a thriving artists’ community. He stayed in Ogunquit for 40 years and was closely associated with Marsden Hartley and Bernard Karfiol and was a student of Hamilton Easter Field. Coolidge operated a small antiques business with his life partner, society painter Channing Hare. Coolidge and Hare were often associated with Ogunquit’s summer parties, especially their porch parties, and their names were synonymous with glamour and chic.

How does this painting capture your imagination?

There are many other associations connected with the title. A golden fleece can symbolize the sea reflecting the sun, a land of golden grain, a fabric woven of sea silk, royal power, wealth, or alchemy. I think all these ideas appealed to Coolidge. There’s also similarly named, well-known seascape by British maritime artist Dawson Montague. Perhaps the seaside allusion had bearing for Coolidge but what I like about the painting is its depth of meaning and layers of intent. There’s a subtle  meaning within the patterns of color and imagery. I’m intrigued by the way Coolidge painted the foliage and foreground with geometric shapes and wooly textures as a way to explain his allusion to the mythological title. I’m also moved by the artist’s reach and desire to say he was more than his reputation and social standing.