Looking Refreshed, Ogunquit Museum Opens for the Season with ‘Shorelines’ 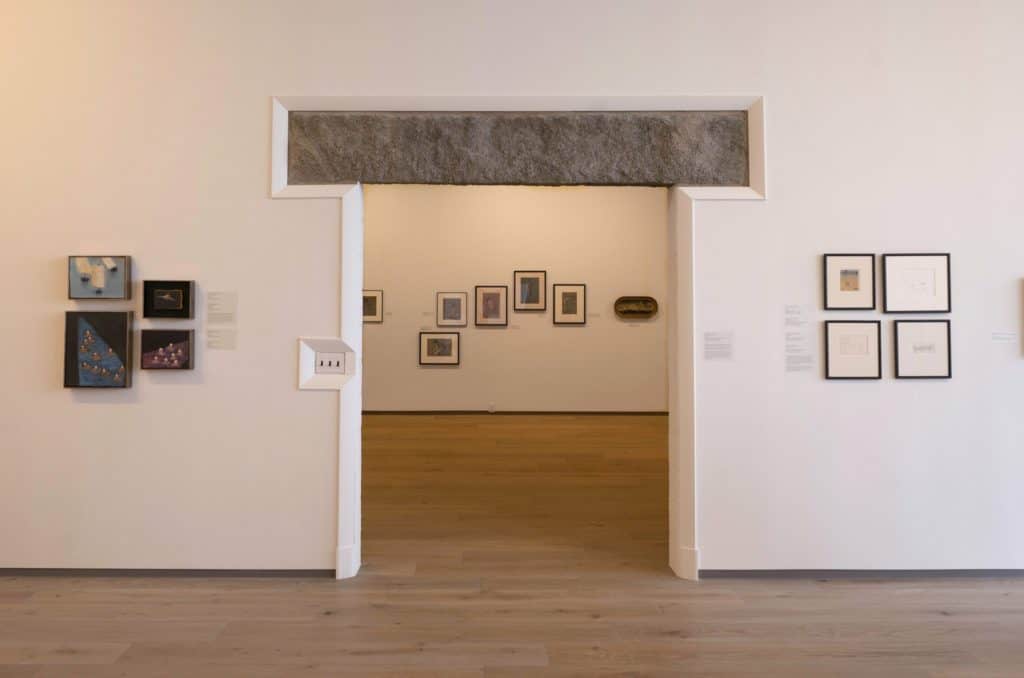 OGUNQUIT, ME – MAY 1: Works that are part of the Shorelines: Coastal Sightings in American Art exhibition on the walls of the main gallery and seen through the doorway are works included in the exhibit Modern Movement: Figurative Works by Arthur Bowen Davies at the Ogunquit Museum of American Art, which opened for its 2019 season on May 1. (Portland Press Herald Staff photo by Gregory Rec/Staff Photographer)

OGUNQUIT — The idea of reopening for the season is incongruous with what’s been happening at the Ogunquit Museum of American Art. The building recently reopened to the public, but it’s been a center of activity for much of the winter with a series of physical alterations that longtime visitors may sense more than directly observe.

Something feels different – the museum is lighter, brighter and a little bit leaner inside and out.

Among other things, the building’s cinder block exterior, a reminder of its 1950s modern architecture, has been sandblasted and reskimmed, and museum director and chief curator Michael Mansfield relocated an abstract bronze sculpture by Abbott Pattison from the side of the museum to a prominent location next to the front doors. The wooden ramp that helped people in wheelchairs into the museum is gone, replaced with a graded hardscape entry. Inside, the flagstone floors have been replaced by 5,000 square feet of light-colored, wide wood flooring, and most of the interior walls have been rebuilt and are still mostly gallery white, with the granite pediments above the interior doors remaining.

There are white steel railings now instead of black, and the iron piping that formed the half-wall separating the main entry from the stairs down into the main gallery is now clear glass. “We needed to address some accessibility issues and wanted to lighten things up and make everything more inviting,” Mansfield said.

Unchanged is the expansive and always stunning view onto Narrow Cove, a setting so appropriate to tell the story of Ogunquit’s role in American art that Mansfield considers it “the first artwork in the collection.” The stairs lead to a dramatic installation of “Boat with Four Figures” by Cushing artist Katharine Cobey. She’s shown the piece at the Portland Museum of Art, Lehigh University and elsewhere, and Ogunquit recently acquired it as part of its permanent collection.

Cobey constructed a 30-foot boat from hand-spun wool, suspended by an armature of steel. Four figures, carved from logs and draped under a wool veil, sit one in front of the other, stern to bow, representing a woman’s journey from child to elder. In the context of today’s conversation about immigration and the placement of the piece overlooking the water’s edge, “Boat with Four Figures” could well represent the coming ashore of a family into a new world.

“Boat with Four Figures” is the visual centerpiece of the season-opening exhibition “Shorelines: Coastal Sightings in American Art,” on view through July 8. It includes paintings, drawings, sculpture and photographs from a range of artists who have engaged the shoreline and the coast in their work. There’s a strong contemporary undercurrent, with Cobey’s piece and a small grouping of paintings from Katherine Bradford’s swimmers series, and a modernist flavor with Rockwell Kent’s 1950 oil, “Blackhead, Monhegan,” on loan from the Plattsburg State Art Museum in New York, and paintings by William Thon.

The soul of the exhibition is a grouping of paintings by Charles Woodbury, the MIT-trained engineer and founder of the Ogunquit art colony; his prize pupil Frederick Waugh, who best embodied Woodbury’s model to paint with verbs and not nouns; and a mostly unknown amateur painter named William C. Welling, who made his living as director of statistics for the state of Connecticut.

Welling and Waugh became friendly through written correspondence in 1929 and 1930, and the letters between them are on view as part of “Shorelines.” In his letters, Waugh lays out his recommendations for palette, form and other technical elements of painting. When painting waves, he told Welling to “notice the angularity of the foam forms,” and he drew an illustration to make his point.

Most importantly, Waugh also repeated a suggestion of his mentor Woodbury, who told his students that if they could not paint plein air on the shoreline, they should capture the waves on film and watch it while they paint to absorb the movement of the water and the break of the waves on the rocks. Welling did exactly that, coming to Ogunquit to record the waves in Perkins Cove on a hand-cranked, 16 mm movie camera, and used his film to study the waves while working on his personal masterpiece in his Connecticut studio. The result is a 1934 oil titled “Seascapes,” very likely the best painting Welling ever made and a direct result of the artistic legacy of Ogunquit that began with Woodbury and extended down through generations of serious and Sunday painters alike.

In the early 200os, Welling’s grandson, James Welling, a photographer and filmmaker, found the film in an attic and connected it with his grandfather’s letters with Waugh. Everything Waugh wrote about in his letters shows up on the film and in Welling’s painting. James Welling used that movie to understand his grandfather’s passion better, and added his own touch, colorizing the black-and-white film and adding a soundtrack of accordion and drums, composed and performed by his brother, the musician William B. Welling. That result is a six-minute movie, “Seascape,” on view in an adjacent gallery.

The Ogunquit Museum and the Portland Museum of Art acquired the movie jointly as a co-purchase. It’s the first film in either collection, Mansfield said. Mansfield’s specialty is new media, and “Seascape” represents his desire to weave modern influences and aesthetics into the interpretation of traditional American art, on which the museum was founded. An overarching theme of modernism influences this year’s exhibitions, he noted, and is evident in “Seascape” and its “inter-generational look at the influence of time, place and material.”

WHAT: Ogunquit Museum of American Art

EXHIBITIONS: “Shorelines: Coastal Sightings in American Art” and “Seascape” through July 8; “Modern Movement: Arthur Bowen Davies Figurative Works on Paper” though July 11; “The View from Narrow Cove”  and “A Portrait of the Artist as a Young Man: Henry Strater at Home & Abroad,” through Oct. 31.