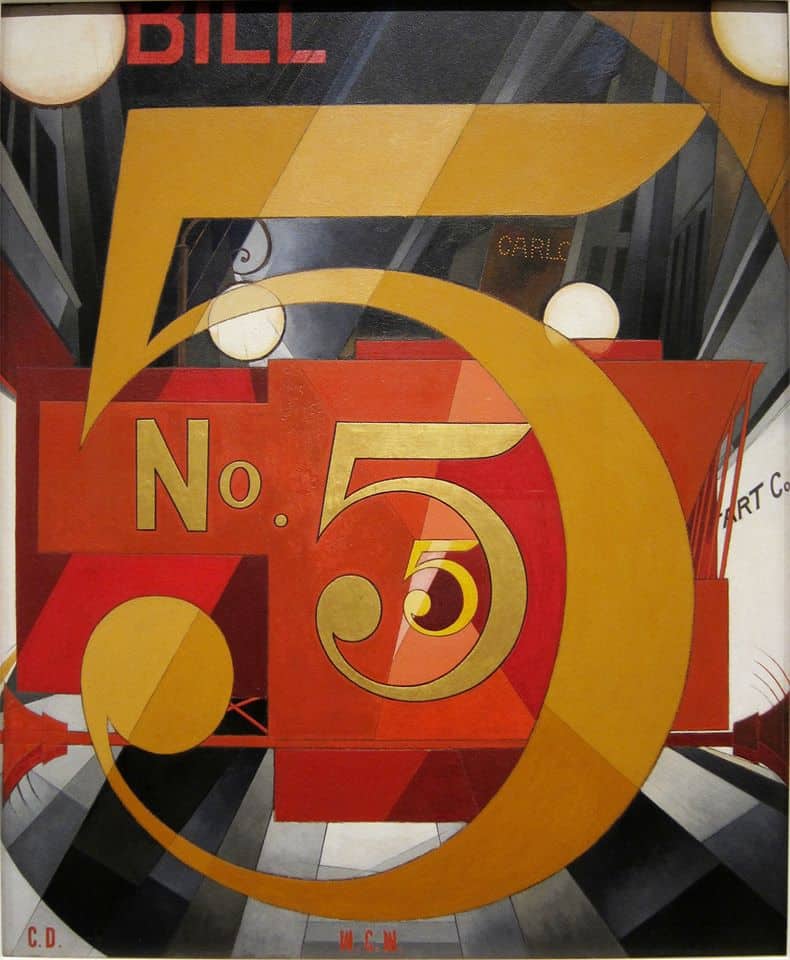 A major advocate of cubist-influenced Precisionism, Charles Demuth’s celebrated industrial landscapes established his career as a Modernist. Yet Demuth achieved equal regard for his poetic still-life florals, primarily painted in watercolor. Most of Demuth’s florals were created at his Lancaster, Pennsylvania home from gardens tended by the artist and his mother. The still lifes represent the peak of his career between 1915-1920. Demuth continued to paint flowers from the family garden as his health deteriorated from complications of diabetes.

Although Demuth spent his later years at home, he maintained close ties with his NY and Ogunquit circle of friends: Marsden Hartley, John Marin, Alfred Stieglitz, Georgia O’Keefe, and Dr. William Carlos Williams. In their honor, Demuth’s poster portraits of celebrated friends used objects and wordplay to convey the life of the sitter, rather than traditional likeness. Special attention has been given to the iconic painting “I Saw the Figure 5 in Gold,” Demuth’s portrait of William Carlos Williams. The portrait was inspired by William’s poem, “The Great Figure.”

Among the rain
and lights
I saw the figure 5
in gold
on a red
firetruck
moving
tense
unheeded
to gong clangs
siren howls
and wheels rumbling
through the dark city. 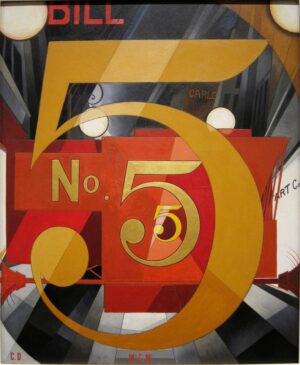 Williams’ poem recalls a night when he was walking down Ninth Avenue in New York City on his way to painter Marsden Hartley’s studio. He heard the noises of a fire truck, only to turn around just as it was passing by. All he saw was the number of the truck, a five painted in gold, on a red background speeding past. At this moment in his career Williams was trying to create poems that were precise and concrete representations of original experiences, so he avoided symbolism and metaphor in favor of simple language that evokes the speed (“moving tense unheeded”), the sounds (“gong clangs siren howls and wheels rumbling”), and the images (rain, lights, firetruck, dark city) he witnessed. Reportedly, Williams wrote this one-sentence poem right there on the street that night.
Williams’ poetry is deliberately straightforward, but Demuth’s painting is complicated. You really must know the poem to decode the painting. The setting is a tunnel-like street, which is flanked by sidewalks and buildings. Much of this backdrop is gray and black, but for the illuminated shop windows and globular streetlamps on both sides. The fire engine dominates the middle of the composition and although its form is abstracted we can recognize it by its red color. We can see the truck’s ladder on the right, and a long bar stretches across the bottom of the truck, which resembles an axle with two wheels.
Demuth divided the picture plane into rectangles and triangles, which refract light and change the color of space and shapes. The diagonal lines force your eyes to race around as you try to understand the image. That identifying number five repeats very clearly three times in the center of the composition. The fives get larger as they surge into the foreground (or smaller as they recede into the background), and in the upper right corner you can glimpse the curve of a fourth five as it leaves the surface of the picture and enters your space. The echoing numbers evoke the fire truck as it races toward you and past. Demuth’s painting, with its prismatic chards of space and color and the recurring number five, visualizes the motion and mystery of Williams’ experience in a futurist way. It collapses an extended period of time onto one still canvas. 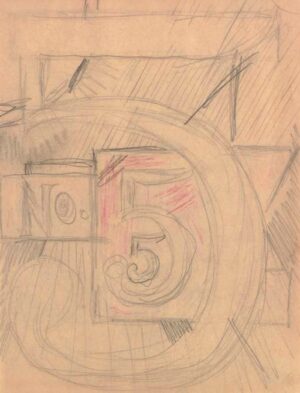 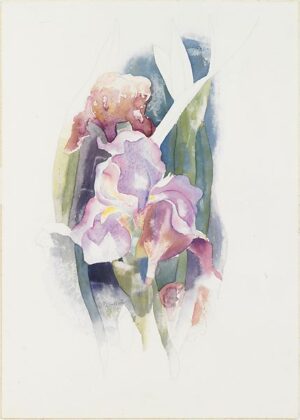 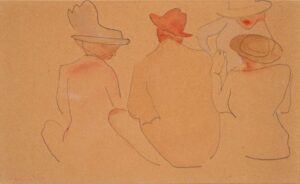 While Demuth’s blithe title may not directly allude to art colony small talk, Demuth was known to associate with many regional Maine and New York painters and patrons, including Edith
Halpert who exhibited Demuth at her Downtown Gallery and Florence Williams, who donated the watercolor to OMAA. Demuth’s dig makes light of small town affairs but the title underscores a deeper social commentary in the portrayal of the leisure class lounging, presumably on a beach, in their Gilded Age finery. During this period, Demuth produced a series of watercolors, many on Coney Island, that poked at controversial social mores, including homophobia and the posh ruling class at a turning point in American culture. With the outbreak of world war on the Western Front, two of the figures represented set their gaze upon a horizon beyond the immediate conversation. 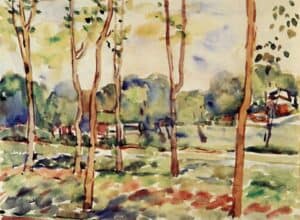