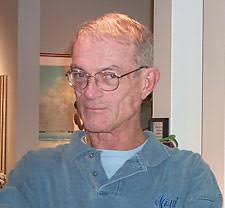 Artist Michael Palmer
Born in 1942 and a native of Kentucky, Mr. Palmer received his BFA in 1970 from the University of New Hampshire.  While a student, he became aware of the art colony in Ogunquit which he has long since been associated.  During his life he has lived and worked places such as the Caribbean and Southern Florida, though his primary residence now is Perkins Cove.

Through his long prolific career of over forty years, the artist’s imagery has gone from rather precise portrayals of Americana to somewhat abstract landscapes with an unmistakable architectural approach, and is often represented in a unique bird’s eye perspective.  Over time, his emphasis has been put more on form and design and less on content and narrative.  Although the settings for his work are not necessarily specific to his living locations of either Ogunquit or Key West, one can imagine an inspiration of one place or the other in his work.

Palmer is known for systematically combining paint and ink in one painting.  He admits that though he sometimes begins painting without any preconceived plan, he often finishes a depiction with minute drawings in ink on painted canvas.

Listed in the prestigious Who’s Who in Art, Palmer’s work has been exhibited in several museum and fine art gallery throughout the U.S. and Canada, and is part of many important public collections. 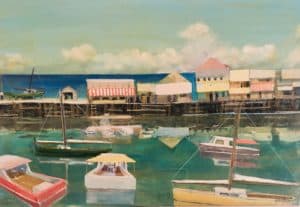