Artist James Welling
James Welling (b. 1951) Internationally acclaimed Artist James Welling was born in Hartford, Connecticut. In 1965 he took drawing classes at the Wadsworth Athenaeum in Hartford, and also began to work independently in watercolor, painting in the fields behind the family house in West Simsbury. Welling was deeply influenced by the work of Charles Burchfield, Edward Hopper and, most importantly, by Andrew Wyeth. Welling studied at Carnegie-Mellon then transferred to Cal Arts and went on to become a contemporary artist and  professor of Photography at distinguished institutions including MIT, UCLA and Bard College.

In 2013, Welling began “Seascape,” a work that incorporates a short 16mm film his grandfather, William C. Welling made of the Atlantic Ocean in Ogunquit, Maine. W. C. Welling shot the film in order to paint a seascape from it. Eighty five years later, Welling sampled the colors from his grandfather’s painting and colorized the original film footage using After Effects. To complete the film, Welling’s brother, Will Welling, composed a soundscape using three accordion tracks and beach pebbles on a large drum. 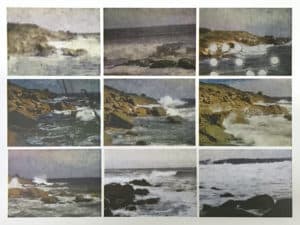